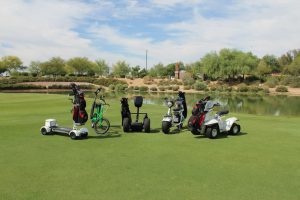 Golf is meant to be fun and there is nothing more exciting than the feeling you get cruising around the links on a single rider vehicle. There are now so many options including two wheeled scooters such as the Phat Scooter which looks like someone took two golf cart tires and stuck them on each end of a skateboard, added a seat and some handle bars. However, it really seems to make perfect sense for the game.

Another two-wheeled version is called the Finn Scooter and is available at Lone Tree Golf Club in Mesa. This version looks sleek in a strange kind of way.
Although the rental method can work slightly different at each course, some are like the public scooters around Scottsdale. You download the app, agree to ride at your own risk and pay the rental fee all through your phone. Of course, the staff is always willing to help.

One of the original alternative golf vehicles that really targeted golf is the Golfboard which is definitely like riding a surfboard with handles. They won the best new product at the 2014 merchandise show and have now grown to more than 300 courses worldwide.

Kierland Golf Resort actually started back in 2005 with the Segway and now has one of the largest varieties and total number of options for alternative golf rides. With five different options, they have something for everyone. The latest addition is the new Kierland Ellwees. These things are straight from Sweden, look futuristically cool with a mix of those off road racing four wheelers that can go from 0-60 in under 4 seconds. Okay, it’s not that fast but your can feel the adrenaline take over just stepping onto this machine. In the Upper Peninsula of Michigan, they call snowmobiles – “Snowmachines “and this thing would certainly be called a “Turfmachine” like no other. I’m pretty sure this thing can climb out of the deepest of pot bunkers (You shouldn’t try this but somebody will). Remember , you’ll have to pay for any damages.

Kierland has methodically added more options through the years including Golf Bikes which should only be attempted by someone that already includes extensive cycling as part of their daily life. No one would call Kierland a mountainess course but they did move some dirt around to give it some character which translates into some uphill peddling.

Kierland’s Director of Golf, Nancy Dickens, said, “When golfers finish a round with one of these vehicles, I often hear them say it was the most fun they’ve ever had playing golf. With this, I know we’re going in the right direction.” 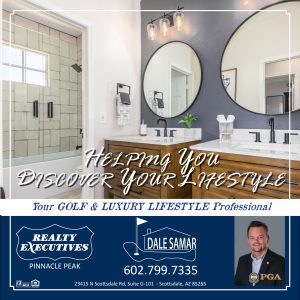